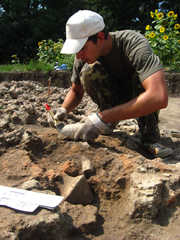 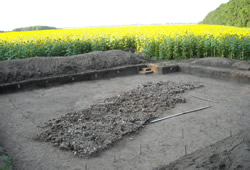 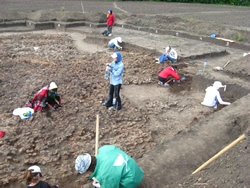 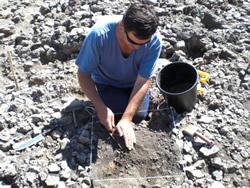 House 42 with the location of the two excavated pits for wet-sieving (Photograph: F. Menotti, 2009).

House 43 with the location of the two excavated pits for wet-sieving (Photograph: F. Menotti, 2009). 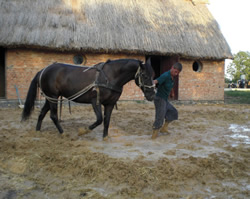 Toloka folklore: Mixing the clay with a horse, 2008.

Wet-sieving
During the 2009 fieldwork season, wet-sieving was carried out in the giant settlement of Talianki (Cherkassy region). The soil was collected from four 50X50cm pits within each of the two excavated houses (house 42 and house 43 – two pits each house). The soil was collected in each pit every 10 cm from the top to the bottom (original surface on which the house was constructed) of the house remains.

Archaeobotanical Analysis
The organic remains of the seventeen wet-sieved bags of soil obtained from the four above-mentioned pits were put in plastic test tubes and sorted and analysed by Dr. Lucia Wick, Basel University.

Palynological analysis of pot contents: Amongst the large number of pottery fragments recovered from the two excavated houses in Talianki, seven entire pots with intact contents have come to light during the excavation. Palynilogical analyses of the contents of these seven pots (five found in House 42 and two in House 43), will be carried out during the final year of the project.

14C Dating
A selection of charcoal particles found in house 42 and 43 (Talianki giant settlement), and house 1 (Bernashovka 1) will be sent to the AMS laboratory in Oxford for 14C dating. The purpose of obtaining 14C dated from various Tripolye Culture settlements (from the Dniester to the Dnieper) is that of developing a absolute chronology (presently still at an infancy stage within the Tripolian research in Ukraine), which will be subsequently compare to the already well-established relative one, in order to prove (or disprove) present migration theories within local and regional Tripolye Culture groups.

Fig. 8: The two excavated Tripolye houses (No. 40 [left] and No. 41 [right]) within the Talianki giant-settlement.

Fig. 9: The map shows the geomagnetic survey of the whole Talianki giant-settlement (elliptical shape – each dot is a house).

Fig. 12: Traces of repair in a kitchen vessel (two holes have been drilled near the crack and the two pieces bound together with an organic rope or string).

Fig. 13: Different layers of clay to form the main floor of the house (House 41, Talianki).

Fig. 14: Imprints of human fingers left on walls during the daubing (House 41, Talianki).

Experimental archaeology and folklore: the Toloka
Since one of the principle objectives of the project is to involve local communities and make them appreciate their cultural heritage, last year, the Tripolye Museum of Legedzeno, in collaboration with the Tripolian Reservation and the Cultural Heritage, organised an important cultural event called the Toloka, whereby people of the local community as well as from other areas were invited to help plaster a newly-built house with clay. For this particular event, the Museum built an experimental Tripolian house and, using the same techniques used by the Tripolians 5,500 years ago, the house was fully daubed in clay mixed with chaff.

This year, the folkloristic activity of traditional Tripolian house building was completed by painting the house. The response of the local community was very positive, and the house was successfully painted using tradition pigments obtained from organic as well as inorganic materials.

This year’s campaign started with a visit to the Institute of Archaeology of the Ukraine National Academy of Sciences in Kiev in February, to organise the whole project and in particular the Talianki excavation for the summer (see below). This initial trip included also the visit of a potential archaeological site in Slavske near Lviv. The Ukrainian team of experts started to work on the project in early spring reviewing the most important literature published in Russian and Ukrainian. The summer field season consisted of the excavation of two house of the Talianki giant-settlement, plus a few test-pits in two other important settlements: Apolanka and Fioderovska. The summer field included two trips to Charkassi and Slavske to meet other experts in the Tripolian research and visit two potential archaeological sites related to the project. An important aspect of the project is the direct involvement of the local community; the Tripolian Museum of Legedzeno has therefore organised an important cultural event called the Toloka, which links experimental archaeological research to folkloristic traditions (see below).

One of the main tasks of the 2009 research campaign was the excavation of two houses within the Tripolye Culture giant-settlement of Talianki. Two houses (No. 40 and No. 41 – see Fig. 7) have been carefully chosen within the Talianki giant-settlement using geomagnetic survey and fully excavated from June to August.

The excavation was carried out by eight professional archaeologists with the help of about 40 students from the T.G. Shevchenko National University (Ukraine), the Kyiv-Mohyla Academy (Ukraine), The Uman National University. The results of the excavation were astonishing: the debris of the two houses were very well preserved, one of the house (40) turned out to be the biggest house in the settlement (22 metres long and almost 6m wide). Some of the characteristic features (altar, oven and elevated shelf [platform]) were clearly visible. Finally both houses yielded a high number of potsherds and seven intact ceremonial pots (see Figs. 10 and 11) and one kitchen pot. An astonishing discovery is that some potsherds showed traces of repairs (see Fig. 12); e.g. some broken plates had been repaired and continued to be used. This shows that pottery was made periodically (possibly seasonally), therefore, during the periods of pottery unavailability, the broken vessels were not thrown away, but repaired and used again.

In addition to the rich ceramic assemblage, the excavation yielded important aspect of the house construction techniques; e.g. traces of different layers of clay to form the main floor of the house (see Fig. 13) and the imprints of human fingers left on walls during the plastering (see Fig. 14).

Experimental archaeology and folklore: the Toloka
An important aspect of the project is to involve local communities and make them appreciate their cultural heritage. This year, the Tripolye Museum of Legedzeno, in collaboration with the Tripolian Reservation and the Cultural Heritage, has organised an important cultural event called the Toloka, whereby people of the local community as well as from other areas are invited to help plaster a newly-built house with clay. For this particular event, the Museum built an experimental Tripolian house and, using the same techniques used by the Tripolians 5,500 years ago, the house was fully daubed in clay mixed with chaff (see Fig. 15). The Toloka folkloristic tradition has been passed on for generations and generations, and in some remote areas it is still part of the everyday life. This event was not only an interesting folkloristic experience, but it was used an archaeological experiment to test archaeological findings and theories within the project.

Introduction
The Tripolye Culture (also know as Cucuteni in Rumania and Moldavia) is one of the most striking phenomena of the Neolithic (locally known as Chalcolithic) in the Eastern European plains. Tripolye settlements covered a very large territory, which included present-day Rumania, Moldavia and Ukraine, spanning from the 6th to the early 3rd Millennium BC. The Tripolye Culture is best known for its exquisite multicolour ceramic (Figs. 1, 2), anthropomorphic clay figurines (Figs. 3, 4) and miniature models of houses (Fig. 5), but, one of the most intriguing mysteries of this culture are the so-called giant settlements, in Ukraine. These agglomerates of houses (of oval shape) cover a surface that varies from 60 to 450 hectares. The largest Tripolye settlement is that of Talianki (450ha) (Fig. 6), located in the Cherkassi District between the rivers Southern Bug and Dniper. It is indeed in this area (Uman and Talne regions) that the majority of giant settlements are situated. Eleven of them are part of the recently-established Tripolye Reservation. The importance of this area (forest steppe) is its geographical location. In fact, because of its exclusively fertile soil and the presence of fairly large woodlands, it offered an ideal environment for agriculture, cattle-breeding and livestock activity. The favourable environmental conditions of this region facilitated the development of these extremely large settlements, especially in the last phase of the Tripolye Culture, e.g. 3,200 to 2,700 bc (CI/CII – Passek periodisation).

Organising Institutions
Institute of Prehistory and Archaeological Science, Basel University
Institute of Archaeology of the Ukraine National Academy of Sciences