Workshops in Spring and Autumn 2012
In collaboration with Helvetas Bhutan and Share Foundation, the SLSA is conducting a research project programme for the institutionalizasion of archaeology in the eastern Himalayan kingdom of Bhutan. Whilst the first three-year project phase was restricted to the excavation of the Drapham Dzong castle ruin dating to the 17th century, the second phase (2011–2013) is focused on the establishment of a basis for the institutionalisation of archaeology with a first documentation of major archaeological sites and preservation and care of field monuments. At the same time, staff members of the Bhutanese Department of Culture are trained in field archaeology, and the first archaeological research reports are created for a first mapping of hitherto known archaeological sites in Bhutan. Therefore, not only teaching and training activities but also scientific data gained during the Swiss-Bhutanese engagement are most notable.

In spring 2012, a two-day workshop on legal aspects in archaeology was held at the National Library in Thimphu. Under the conduct of Swiss lawyer and specialist in heritage conservation, Hansruedi Diggelmann, and supported by the archaeologist Christoph Walser from the Universities of Zurich and Bamberg (Germany), Prof. Philippe Della Casa (University of Zurich) introduced thirty employees from different public departments into the subject. The draft of the Heritage Sites Act of Bhutan was then discussed in groups.

In the following, the workshop group moved to Jakar in Bumthang, central Bhutan. Within one week, systematic field survey was taught by Prof. Philippe Della Casa, Christoph Walser and Peter Fux (Museum Rietberg Zurich). Furthermore, the participants were introduced into mapping and surveying as well as data management using a geographical information system (GIS). Subsequently, the delegation visited several interesting sites, mainly for the purpose of planning further activities.

In autumn 2012, the archaeologist Christian Bader conducted a two-week teaching module in documentation and inventory of building structures. Twelve Bhutanese participants conducted a comprehensive documentation of the Obtsho-Dzong ruin in the Ghasa district, situated in the dense forest, 2,500 m.a.s.l. After the successful participation in all teaching modules held in 2011 to 2014, trainees will receive an official diploma in practical field archaeology (Certificate of Advanced Studies). As a main goal, five to ten diploma holders should be ready to take over archaeological tasks within the Ministry of Culture. It is hoped that in 2013, the first Bhutanese archaeological positions will be installed as a section within the Division for Conservation of Heritage Sites.

The project is generously supported by Elena Probst, President of the Share Foundation, and thanks to the successful collaboration with Helvetas, the project is running very successfully. A donation from Mrs. Verena Ris-Horstmann and Dr. Roland Ris allows the SLSA team to conduct archaeological fieldwork on a scientific basis. 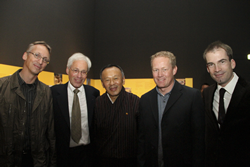 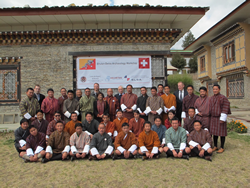 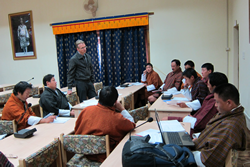